You are here: Home / Articles / Accusing and Defending Don’t Work! 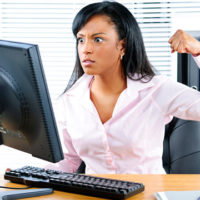 Many co-parents think that they must defend themselves against the accusing words of their ex. When I ask a parent why they feel they have to respond to lies or accusations, they often say, “Because it’s not true!” That may be the case, however, it’s the defense that keeps the conflict alive. Our culture seems to promote this idea that all must be defended or people will just believe what they hear or read. I have even heard parents say that they have to write back their defense to an untrue email so the judge can hear their side of the story if it ever gets read in court. I have to laugh at that because that assumes the judge will believe anyone’s point of view because they put it in an email. Rather, I try to appeal to both co-parents’ sense of reason by saying that when I (or even a judge) reads 3,452 emails going back and forth over a 30-day period, I simply conclude BOTH people are unstable! Feeling the need to defend is normal, however, acting on that feeling is typically a function of poor self-esteem. Each time you defend against false accusations made by your ex, it tears away at you a little more, causing you to once again question yourself. Instead, it is best to ignore antagonistic communication and just deal with practical issues about the kids.

If you are a chronic accuser, I can tell you it is a poor strategy to think that emotionally beating up on the other parent will produce any positive change. That kind of negativity may have worked in the marriage (and probably contributed to its demise), but definitely won’t get you what you want after divorce. Instead, my advice is to keep a separate electronic journal (that you only share with your attorney) of all your grievances and accusations against the other parent. But in your actual co-parent communication, just stick to the business of raising children. Accusations, condescending words, know-it-all pronouncements, and parental scolding do nothing but create conflict and never produce hopeful change in the other parent. And besides all of that, it’s really bad for your kids.

The Simple TruthsAvoid Divorce Story-Telling with Your Kids

The Tit for Tat Trap

Narcissists in the Courtroom

THE MAGIC OF SUMMERTIME